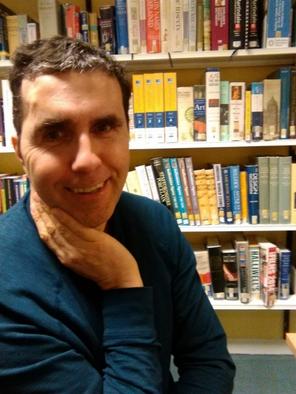 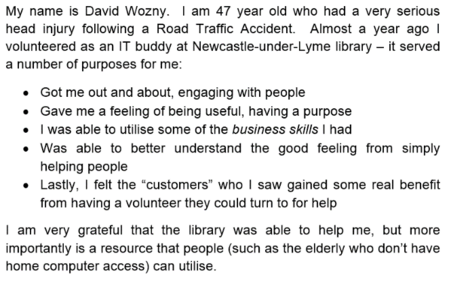 With hindsight, my path through various volunteering positions was an approach which I don’t think could have been bettered if I was consciously deriving a way back into professional employment.

​​​Dog Walking - July 2016
I found opportunities to help out with dog walking after doing research on a volunteer’s web site named: www.do-it.life  I learned that some owner's personal attachment to their pets could make for challenging social interaction.  In one circumstance, a dog owner I tried to help insisted that he came along when I took his dog on any walks - even with my eleven year old daughter.  I decided to finish with volunteer dog walking, in any case within a few months we had our own (my first ever) dog, Ronnie - a labrador.

​​​Midlands Air Ambulance Charity (Shop) - August 2016 to October 2016
I worked in the store room sorting clothes into same-sized piles, labelling them and putting them onto hangars.  I was offered the role after I walked into the shop and asked if there was any way in which I could help.

​​Royal Voluntary Service (RVS) - September 2016 to July 2017
I undertook voluntary work for the RVS following research on do-it.org.  I principally befriended two people: Trevor and Gloria.  Trevor was an awkward person who I failed to like, but nevertheless I persevered in helping out.  There came a point when he was too unpleasant with his attitude around some of the people in his life that I had to withdraw from befriending him as he made me feel uncomfortable.  Trevor was a person who was right about everything, even when he was plainly wrong.  I became good friends with a lady named Gloria.  She was lovely and I know we shall remain friends for good.  A third person I briefly helped was a ninety year old man who lived in Trentham. I’d take him by car to Haywood Hospital every week to visit his sixty-five year old son who’d had a stroke.  I visited Broadfield Ward where I had been a TBI patient in my early recovery.  Some of the staff remembered me - in my fog of confusion at the time, I had apparently told them that I'd been injured in a roller coaster crash on the Smiler at Alton Towers.

The RVS asked me to take part in an interview with the Staffordshire Evening Sentinel regarding my work with them, a PDF of the article can be accessed by following this link.

IT Buddy (Newcastle Library) - November 2016 to July 2017
I stepped up from RVS befriending to utilising my IT skills, by helping the elderly and unskilled on shared computers at my local library to use email or search engines or comparison web sites, etc.  I started off doing one four-hour shift in my first week, but after a month I enjoyed it so much that I would do two six-hour shifts each week.  The library staff would sometimes have to insist that I went for breaks to get my lunch.

It became apparent that utilising my IT skills was only about ten per cent of what the IT buddy role entailed.  I discovered that demonstrating empathy and the simple act of listening properly was far more important to anyone I dealt with - my RVS work had likely helped me on that score.  I enjoyed my IT buddy role immensely and I became good friends with a number of library staff.  Upon leaving to return to professional employment, I wrote the piece in the below snippet for the library to put into a case study they were publishing.

I miss being an IT buddy - not for the work, but for the feeling of making a positive difference (however tiny) to people’s lives.