I had always enjoyed writing documents, I was a technical writer at one point during my professional career, see link.  Post-TBI I took much satisfaction creating basic documents and making them suitable for the people I was dealing with.​

I wrote instructions for my mother to help her use her new mobile phone.  I enjoyed refining the document over and over again, making it as useful as possible for someone with very limited modern technology skills, see link.

I made a good friend (Gloria) through the RVS befriending service, who had a similar predicament to my mother with a new phone I bought for her.  I prepared very basic instructions for her, see link.

I received support from a speech and language therapist who helped me gain confidence in my ability at word selection and conversing.  In the videos below I was talking to my therapist, who recorded me on my mobile phone as I described matters I was familiar with.​

​The recordings were made on 7th February 2017, eighteen months after my TBI.  At the time I felt I had done well, and I had!  Reviewing the videos a further two years on in February 2019, I saw how well I dealt with memory recall issues, in the second video in particular.  I struggled with the names of the boroughs of New York city and the rivers surrounding Manhattan, even though I knew I was fully aware of them.  I resisted any urge to dwell or self-criticize and just moved on.  I'm really pleased at how I simply accepted my limitations and took a pragmatic approach. 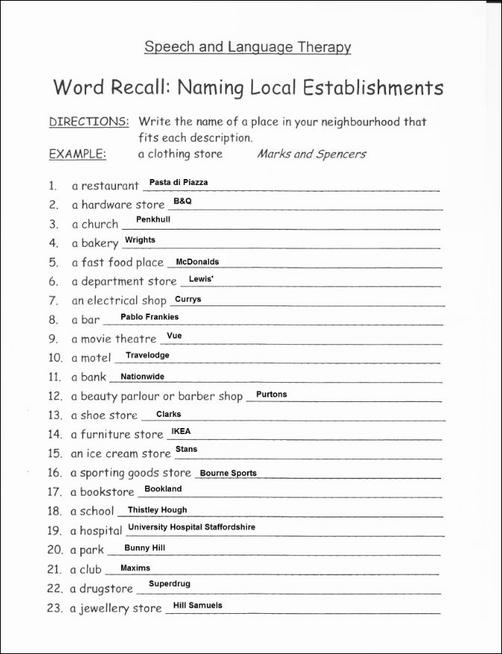 Explaining how to make a cup of tea.

​Summary of "The Island"
I undertook summarising a favourite novel of mine, The Island by Victoria Hislop.  I was given the five "W" categories to frame my explanation (following).

​What?
It is about the lives and events of people who have leprosy disease.  It is not really about the illness, more about the fascinating relationships and experiences of the people who have led normal lives and then are moved to an isolated island to live out their lives.
Where?
Set on the Greek Island of Crete, specifically a little island just off Crete called Spinalongo.
Who?
Spinalongo mainly has lepers from Crete itself whose residents are largely based around a (basic) fishing culture, but also gets an influx from the more sophisticated city of Athens which makes a big impact on the dynamics and vibe of the island.
Why?
It shows how people with the "teminal illness" of leprosy still work on making their lives tolerable and worthwhile.  In the meantime doctors are working on cures for the leprosy medication and we see how this impacts the lifestyle of all.
When?
In the pre-war years, and then going through the war and into the sixties.  Ending when a cure for leprosy is discovered and developed.

Word Recall
Part of my therapy was to help me with word recall.  The snippet below is from an email I sent to my therapist advising how I was enjoying the task she had given to me.  You can see my answers to "Naming Local Establishments" further down this page.