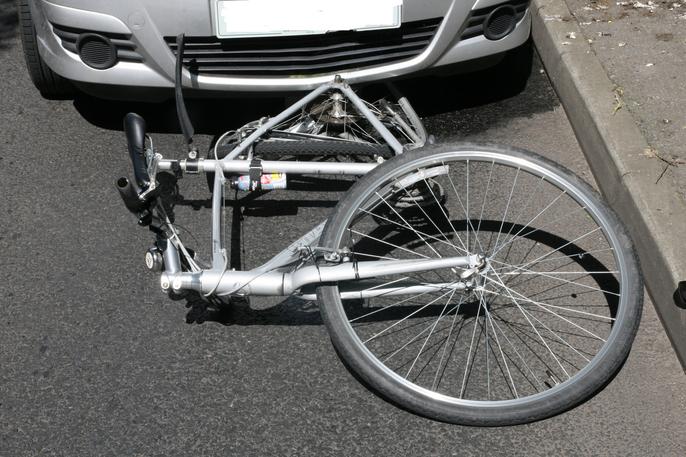 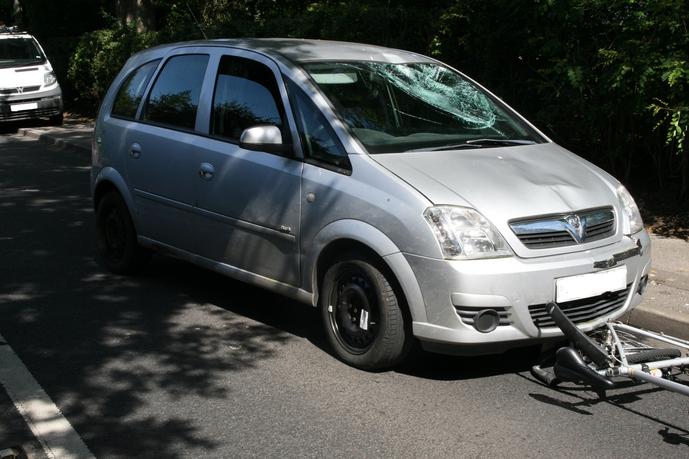 A passing ambulance taking an elderly person to hospital saw there had been a road traffic collision and pulled over.  The ambulance driver triaged me and advised the emergency services to instigate an air ambulance, perhaps saving twenty minutes before the 999 road ambulance would have arrived.

Cheshire police blocked off the road and performed a full accident reconstruction.  Kenneth advised the police that he simply didn't see me as I rode in the centre of the carriageway to circumvent the BT van, he was remorseful and apologetic.

The police instigated prosecution against Kenneth for driving without due care and attention.  Kenneth had already surrendered his driving licence and accepted entire responsibility for the collision.  During the prosecution phase Kenneth was hospitalised and it was recorded that he would unlikely be discharged.  The Crown Prosecution Service decided it was not in the public interest to prosecute him and dropped all charges.

In 2017 I attempted to contact Kenneth's family via police contacts to advise them that I did not hold any bad feelings against Kenneth and have made a very positive recovery, due to police jurisdictions I was unable to do this.

​Statement Given to the Police by the BT Engineer
I am James "X" and reside at the address overleaf.  I have been employed as a  British Telecom engineer for the past 35 years. I currently work for the Openreach part of the BT group.  I have held a UK driving licence for the past 34 years.  I have no points on my licence and consider myself to be an experienced, careful and competent driver.  I drive approximately 6000 miles per year.

On Friday 31st July 2015 I had started work just before 8 AM, clocking on at Chester North Telephone Exchange.  I had already been assigned jobs in the Nantwich area the day before so I made my way towards Nantwich. I was driving the works van, a Vauxhall Vivaro licence number "X". My first job was to report to the building site office on a new housing estate just off the A51 London Road, Stapely, known as Stapeley Gardens.  I arrived there at approximately 10 AM and began doing some work on one of the inspection pit chambers on the estate.  The cable from the housing estate then went back to a green roadside cabinet located somewhere along the A51. The exact location of this green cabinet was unknown, but I estimated it to be approximately 300 metres from the inspection pit.  Once I had finished my work on the housing estate I made my way towards the green roadside cabinet, it was now about 10:45 AM.

Exiting the housing estate, I turned right onto the main road, the A51 heading in the direction of Stone.  I noted at the time when I pulled out onto the main road that there was hardly any traffic about and I was able to exit the junction straight away.  The A51 London Road at this point is a single carriageway road with one lane in each direction.  It is subject to a 40 MPH speed limit, it connects the towns of Nantwich and Stone.  I knew that the green cabinet wouldn't be far away but I was going quite slow, around 25 MPH in order to locate it.  I then spotted it on my left-hand side approximately 50 metres ahead.  It was located on a grass verge just off the roadside pavement.  I checked my rear mirrors and signalled left to indicate I was pulling over to be nearside.  There were vehicles behind me, but some distance behind.  At the same time as I signalled, I put on my amber rotating beacons, located on the roof of the van.  These would indicate to motorists that I was planning on stopping and make my van more visible.

To allow better access to traffic passing my stationary vehicle, I pulled onto the pavement, slightly mounting the small kerb.  I had only driven about one minute before coming across the cabinet.  I pulled up just beyond the cabinet, so that the rear of my van was level with it.  I would describe the weather as bright sunshine, clear skies.  The road surface was dry.  Visibility was excellent and there were good views ahead and behind me from where I had parked.

I would say that London Road at this location is still in a residential area.  There are houses to the right-hand side of the road as you head towards Stone.  There is no offside pavement, as the driveways from these properties lead to the main road.  I noticed that behind the green cabinet were open fields.  Whilst the visibility was excellent, I noted that along this stretch of road there were several large trees on either side of the carriageway, with their branches extending over towards the middle of the road.  As a result, you had a dappled effect with areas of shade, then brightness as the bright sunshine shone through the foliage.

Having come to a stop, I waited a few seconds to allow two cars to pass me, heading towards Stone, before opening the driver's door.  Having got out of the van, I walked down the offside to the rear door, got out my tool kit bag, shut the door and placed the bag on the pavement next to the cabinet.  I then opened the nearside sliding door with the intention of getting out my "keep left" sign and cone.  I can't remember exactly what I did next or where I was in relation to the van, but I think I returned to the cabinet to check the identifying number to ensure I had located the correct one.

I had only been stopped for about one minute at this location when I heard a loud bang. I thought initially it sounded like a tyre blow out.  The sound appeared to have come from the other side of my van.  I didn't notice my van move at all, so I knew nothing had hit it.

I looked up and whilst looking through the nearside window of the van and my windscreen I saw a small silver car pass to the offside of my van heading in the direction of Stone.  I thought I heard the sound of a revving engine as it passed my van as though it was out of gear.  The car having passed my van, I was not able to view it without looking through the van windows.

The silver car then continued passing my van before coming to a gradual stop approximately thirty metres beyond my van, stopping at an angle on to the Stone based carriageway, facing towards the nearside kerb.  I looked at the car, waiting for somebody to get out out it, but nobody did.  I was then distracted by a female who had stopped behind my van driving a BMW X5.  She said to me "I think something has fallen off his car."  I said to her "I thought it was a tyre blowout".  I then looked towards the small silver car again and saw a push bike wheel protuding from the front nearside of the car.  Based on what the BMW driver had said to me, I still thought that the bike had fallen off the car.  I hadn't seen a cyclist at this point.  Then another silver car pulled up just short of the small silver car that had stopped.  The elderly female driver got out of the car and shouted over to me "Have you called an ambulance?"  I then realised there must have been a collision involving a cyclist.  I immediately walked over to the car and saw a male cyclist lying on the carriageway.  He lay near to the offside of the silver car, his legs by the front offside of the wheel and his head facing the centre of the road.

I then rang 999 on my mobile, mobile number "X".  I was unsure of my exact location to pass onto the ambulance service so I knocked on a couple of properties nearby.  One of the occupants answered the door and was able to give me a postcode which proved useful to the emergency services.  It was whilst I was returning to the roadside from this resident's property that I saw an ambulance had already arrived.  The ambulance man took over the call to provide an update as to the cyclist's condition.  I realised that it wasn't an emergency response ambulance, but more like a minibus with an elderly patient in the rear.

When I first saw the cyclist he was in a bad way.  He appeared to be gasping for air and wasn't really moving, although I did see him move his arms at one point.  The cyclist was wearing black cycling shorts, black lycra top with flashes of red either on the sides or to the front and a silver helmet.  He was about late 30's, early 40's. I didn't pay much attention to the bike but I know it was jammed beneath the front of the silver car.

I'm not sure at what point the elderly male driver had got out of his car.  He was clearly shocked, very slow at walking and used a walking stick.  I would say he was at least in his 80's.  I noticed that he had placed a coat over the cyclist at some point.  Only later I noticed the windscreen smashed on the silver car.  The ambulance paramedic arrived a short time later.  I remained at the scene and gave my details to the police.  As my van was within the scene, I remained there for at least three hours until the police had re-opened the road.

The engineer was working when he heard an unusual loud bang.  He left his workplace to see what he thought may have been a tyre blow-out and saw me lying in the carriageway.  The engineer dialed emergency services on 999, this was at 10:48 on 31st July 2015.  The full statement given to the police by the engineer is shown at the bottom of this page.

A car had collided with my bicycle.  I hit the windscreen with my head, then careered up onto the car roof before rolling off onto the carriageway.

I was hit by a gentleman (Kenneth B) in his eighties in a Vauxhall car.  He wasn't speeding, he was driving at 40 MPH in a 40 MPH zone.  A lady driving a BMW had been following Kenneth, but didn't see the incident.  Despite having her windows closed, she heard a large bang (again suspecting a tyre blow-out).  She immediately pulled over behind the BT van to investigate.  She looked around and saw me lying in the carriageway, I was unconscious, foaming at the mouth and bleeding from my right ear.  She asked the engineer to call 999, he responded that he had already done so.

​A British Telecommunications (BT) engineer was working near Nantwich in Cheshire, England, he had parked his van on a pavement to access equipment which needed servicing or repairing.  The engineer positioned a warning sign to inform following traffic that his van was partially blocking the road.  It was a clear, bright day.