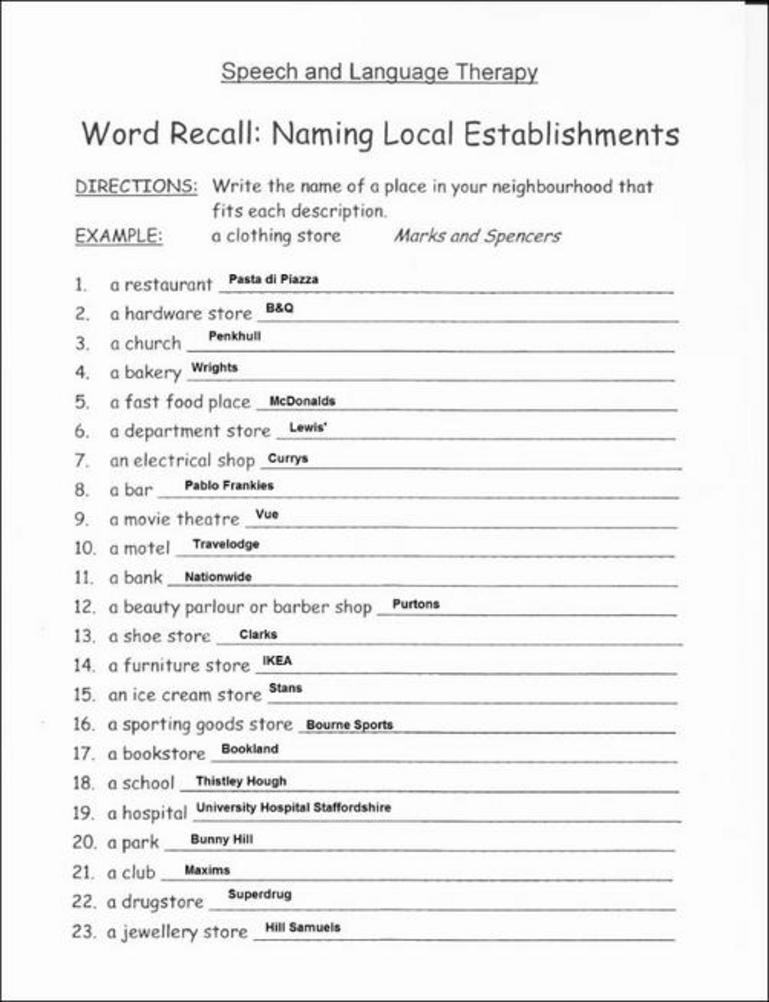 Explaining how to make a cup of tea.

A physiotherapist was a significant member of my multi-disciplinary team supporting me in my early recovery phase.  A report she wrote on me can be viewed by clicking on this link.

I'd had my entitlement for claiming PIPs benefit determined during tests at a DWP office; I'd failed in the context that I was deemed ineligible for payment.  An NHS community liaison assistant (Sue Jones) was with me during the tests and recognised that they didn't truly reflect my lack of independence.  Sue helped me write the letter which you can view by clicking this link, it was successful in supporting my appeal to the DWP.​  Sue retired, and subsequently  advised me that her role had sadly been discontinued.  Without Sue's help I would have struggled greatly in chasing up DWP or engaging with the DVLA to regain my driving licence.

Word Recall and Articulation
I undertook summarising a favourite novel of mine, The Island, by Victoria Hislop.  I was given the following five categories to frame my explanation.
​What?
It is about the lives and events of people who have leprosy disease.  It is not really about the illness, more about the fascinating relationships and experiences of the people who have led normal lives and then are moved to an isolated island to live out their lives.
Where?
Set on the Greek Island of Crete, specifically a little island just off Crete called Spinalongo.
Who?
Spinalongo mainly has lepers from Crete itself whose residents are largely based around a (basic) fishing culture, but also gets an influx from the more sophisticated city of Athens which makes a big impact on the dynamics and vibe of the island.
Why?
It shows how people with the "teminal illness" of leprosy still work on making their lives tolerable and worthwhile.  In the meantime doctors are working on cures for the leprosy medication and we see how this impacts the lifestyle of all.
When?
In the pre-war years, and then going through the war and into the sixties.  Ending when a cure for leprosy is discovered and developed.

Communication
Part of my therapy was to help me with word recall.  The snippet below is from an email I sent to my therapist advising how I was enjoying the task she had given to me.  You can see my answers to "Naming Local Establishments" further down this page.

A group of occupational therapists, psychologists and physiotherapists began supporting me in April 2016.  The helpers met up for Multi-Disciplinary Team (MDT) meetings at my house on a periodic basis, minutes were recorded at each meeting, they can be viewed by clicking on the links below:

One of my tasks was to work on my previous vocational skills related to organising and publishing documentation.  I undertook organising recipes for cooking, which was something I had very limited practical knowledge of.  I found that the exercises were both enjoyable and rewarding in the sense that I was able to evidence (to myself) that I still had strong organisational skills when I carefully applied myself to undertakings.  In the documents referenced below, I took the recipe information I'd retrieved from the BBC web site, then added further sections to make them more explicit and detailed for my own use.

Documenting
I had always enjoyed writing documents.  I'd been a technical author, see link, at various points during my professional career.  Post-TBI, I unwittingly began to utilise my professional skills of writing technical documents for a non-technical audience.  Among the documents I wrote either for RVS clients, or my own mother were:

Speech and Language Assistance
I received support from a speech and language therapist who helped me gain confidence in my ability at word selection and conversing.  In the videos below I was talking to my therapist, who recorded me on my mobile phone as I described matters I was familiar with.​

​The recordings were made on 7th February 2017, eighteen months after my TBI.  At the time I felt I had done well, and I had!  Reviewing the videos a further two years on in February 2019, I saw how well I dealt with memory recall issues, in the second video in particular.  I struggled with the names of the boroughs of New York city and the rivers surrounding Manhattan, even though I knew I was fully aware of them.  I resisted any urge to dwell or self-criticize and just moved on - I'm delighted by how I simply accepted my limitations and took a pragmatic approach.