The diary entries below were written by Ruth and her mother Jean.

Weird: When Dave woke Friday morning he slept through three alarms. He said "Had the deepest sleep ever and had dreamt about being in a really deep sleep".

Day 7
Gradual reduction of sedation all week.
Brought Dave close to consciousness.
Me and Sue visited and he was eating well.

Day 8: Black Friday - 7th August 2015
Dave vomited in early hours of the morning which caused his system to free-fall.
We were prepared for the worst.
Dave turned on to his stomach for drugs to sedate to the right level.  One of which was to give artificial paralysis.

DMW: There is a two week gap between diary entries.

Day 32
Responding at a new level.
Sits out in the chair for the first time.

Day 35
Dave starting to say a few faint words.
AW visits again - Ruth steps in with his employers and the ward manager.

Day 41 - 9th September 2015
Dave very lucid for first time for about 3 hours.
Asking about accident.
Apologising.
"Knows it's been terrible".

Day 50 - 18th September 2015
Dave starting to make sense of the world and events that have happened to him.
Reads from the whiteboard for the first time - location and date.

Day 51
Dave obsessed with wee process!
Uses bottle in bed himself for the first time.
Progress!!

Day 52
Dave convinced he went to the moon, but when asked if he'd seen Neil Armstrong: "He was there earlier than I was".
What does Ruth do for a living?: "Sorting out lots of stuff for rabbits... and recruitment".
Understatement of the year: "Ruth you are doing a fab job darling, I'm just embarrassed I've been a bit under the weather".
Obsessed with oranges: "When I was reading the Telegraph Ruth, is there anything in there about the orange situation".

Day 56
Physios had Dave on his feet for the first time.
Ruth initiated legal action (for AW).

Day 57
Dave moves to Haywood.
Fully back with us next day and raring to go.
Feeding tube comes out.
Puree food and thickened drinks.

Day 59 - 27th September 2015
DMW: Olivia visits for the first time - it was the eve of Olivia's 11th birthday.  Olivia has since told me that despite all the advice she'd received, she expected to see a person with broken limb type injuries.  Seeing me with a shaved head and skull scars was disturbing, but she said that in conversation I seemed nothing like the dad she knew.​ 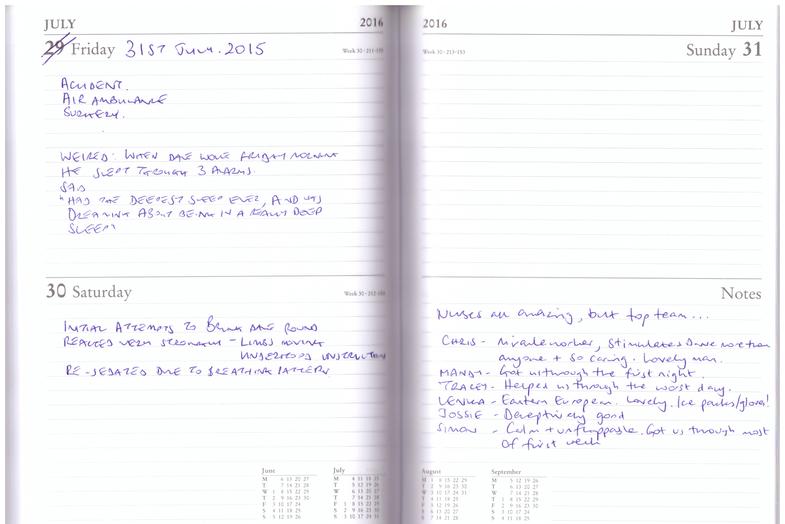