GPS data recorded the duration of the flight, demonstrating that the 15-mile journey which may have taken approximately thirty or forty minutes in regular traffic by land, took just nine minutes by air.  The speed of being transported by air ambulance (miles 17 to 30) compared to David's cycling speed (miles 1 to 16) is illustrated in the following graphic. 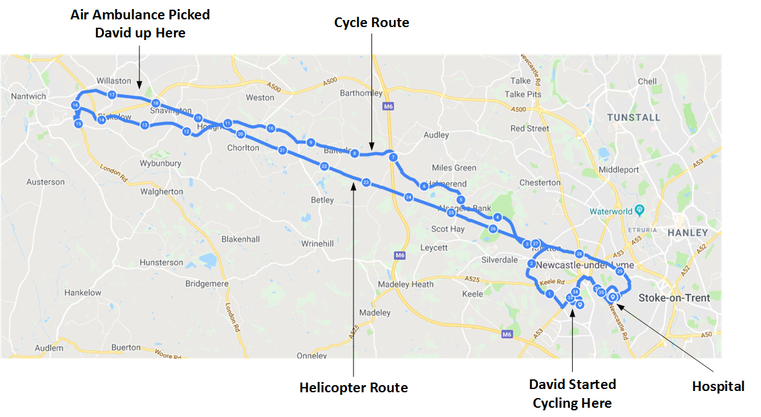 David explains: “Before my accident (July 2015) I was a 'high flyer' professionally speaking, but after high flying in a helicopter I have only recently recovered well enough (July 2017) to be able to return to paid professional work again.  I desperately wanted to be useful again, so during my recovery I did many volunteering jobs for the Royal Voluntary Service (RVS) and at my local library, where I was able to empathise and understand people's needs in my role as an IT buddy”

This page is taken from an article in an air ambulance charity magazine.

Keen cyclist, 48-year-old David Wozny, was enjoying a 30-mile bike ride from his home in Newcastle-under-Lyme on Friday 31st July 2015, when he was hit by a car near Nantwich in Cheshire.

A severe head injury rendered David unconscious, and it was quickly apparent to paramedics when they arrived on the scene that his injuries were life threatening.

With a head injury requiring urgent expert care, the aircrew made the decision to fly David in the air ambulance to the Royal Stoke hospital in Stoke-on-Trent.

A GPS tracking app on David's iPhone on the day of the accident recorded his route, including the flight in the air ambulance to the hospital.

The map below shows his journey changing from cycling on twisty roads (miles 1 to 16) to a straight line (miles 17 to 30) - the air ambulance flight to the hospital.